Antipsychotics are generally thought to be effective against positive symptoms of schizophrenia, though they are less effective for treating cognitive deficits and negative symptoms associated with schizophrenia. Results from animal models suggest that the dopamine D3 receptor plays an important role in regulating cognition, mood, and social functions3. Most currently available antipsychotics have a lower affinity for D3 receptors relative to the very high affinity of dopamine itself for the D3 receptor that is why they do not occupy dopamine D3 receptors in the living brain3. Cariprazine, on the other hand, is unique among antipsychotics in that it has a higher potency for the D3 receptor than dopamine itself, meaning that the net effect of cariprazine administration is D3 receptor blockade4-8. D3 receptor blockade in patients with schizophrenia is hypothesized to result in procognitive, antidepressant, and reduced negative symptom effects3. Cariprazine has demonstrated efficacy in behavioral preclinical models of negative/mood symptoms and cognitive impairment9–14. The efficacy in these animal models has been shown to be at least partially dependent on its activity at the dopamine D3 receptor, since its effects on anhedonia and cognitive impairment were apparent in wild-type mice but not in D3 receptor‑knockout mice10,14.

At pharmacologically effective doses, cariprazine shows relatively similar occupancy at both D3 and D2 receptors, as demonstrated by in vivo nonclinical and human PET studies15. Dose-dependent occupancy of dopamine D3 and D2 receptors was observed in patients with schizophrenia dosed with cariprazine in the therapeutic dose range1. In brain regions with higher D3 receptor expression, cariprazine displayed greater preferential occupancy for D3 versus D2 receptors15. Drug affinities for D3 receptors for many agents are about the same than their affinities for D2 receptors, but they are mostly lower than dopamine’s affinity for the D3 receptor3. Therefore, effects attributed to D3 receptor blockade are not associated with any drug other than cariprazine, since in the living brain, in the presence of natural dopamine, D3 receptors are not blocked by any antipsychotic other than cariprazine3,4. Concerning safety, blockade of the nigrostriatal or tuberoinfundibular pathways, which is associated with extrapyramidal symptoms (EPS) and elevated prolactin levels, could potentially be avoided with partial agonist16; so theoretically, cariprazine should cause fewer side effects of this nature. However, as observed in clinical studies, this has proven to be true for prolactin levels, which do not increase in response to treatment with cariprazine17, although increased incidence of EPS/akathisia is noted17, for which there is no apparent explanation16. 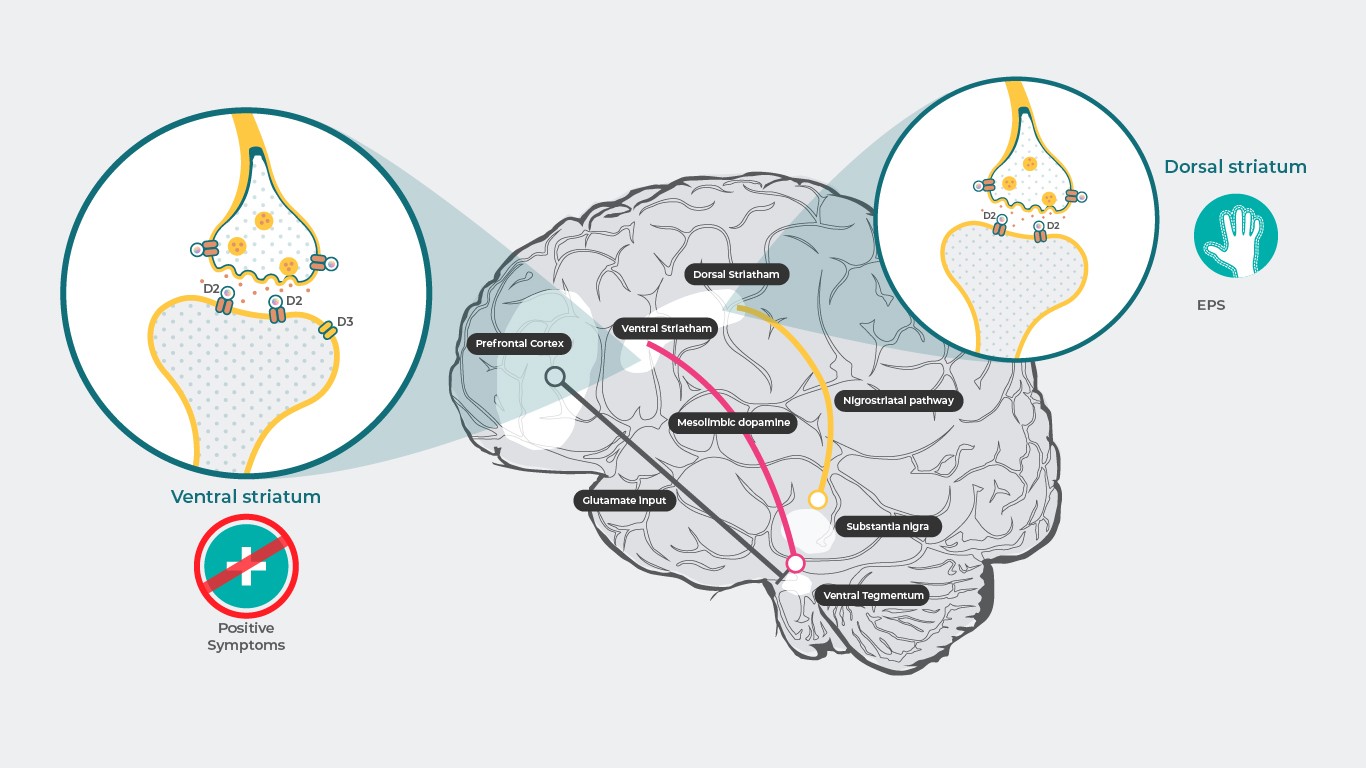 Receptor occupancy of cariprazine showing avoidance of blockade of the nigrostriatal or tuberoinfundibular pathways.

In vitro, cariprazine exhibits partial agonist activity at D3 receptors1. Since most D3 receptors are localized in brain areas where hyperdopaminergia is present in schizophrenia (ie, in the mesolimbic dopaminergic system)15,18, cariprazine acts as a functional antagonist on these receptors. D3 receptor antagonism is associated with pro-cognitive, antidepressant, and anti-negative symptom effects3. Confusingly, these same effects are also linked to cortical functions, where hypodopaminergia is present in schizophrenia18. Herein lies the question of how does cariprazine normalize these hypodopaminergic states by D3 receptor blockade? 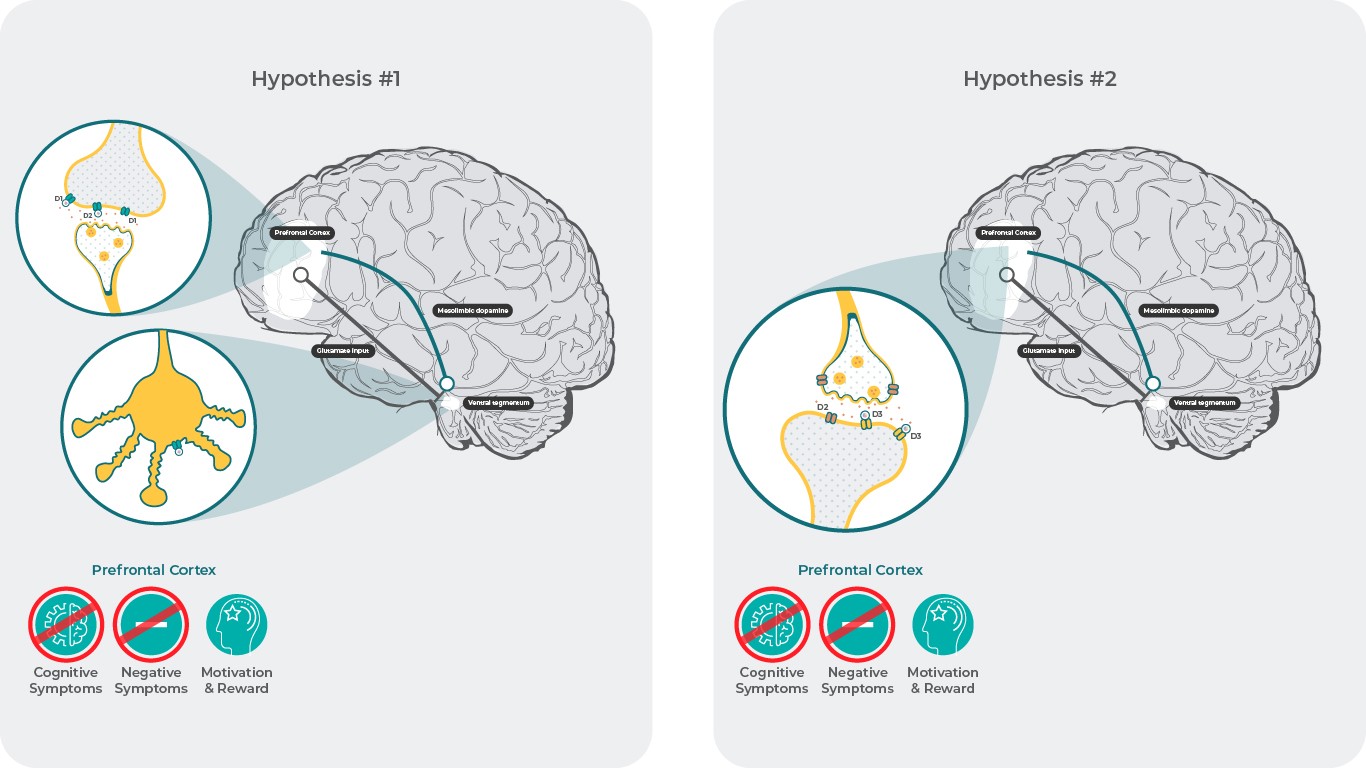 Negative symptoms and cognitive impairment have been associated with a hypodopaminergic state in the prefrontal cortex (PFC)18. The cause of this may be decreased dopamine release in the PFC due to activation of presynaptic dopamine D3 autoreceptors in the ventral tegmental area (VTA) that project to the PFC3. Under these conditions, it is believed that D3 receptor antagonists/partial agonists may block the inhibition of these neurons, which in turn results in an increase in dopamine levels in the PFC, normalizing the hypodopaminergic condition3. This increase in dopamine may reverse the hypodopaminergic state and result in improvements in negative symptoms and cognition via activation of D1 receptors in the PFC, which are not active in low dopamine conditions due to the low affinity of dopamine for these receptors3.
Although the exact mechanism of action of cariprazine and in fact all other antipsychotics is still unknown, results from preclinical experiments with cariprazine do not appear to support this hypothesis19-26. However, it is possible that a different effect would be seen in humans, as the mechanisms and functional consequences of somatodendritic dopamine transmission in the VTA has been reported to vary among species. These differences would be expected in vivo to affect the downstream activity of the mesocorticolimbic dopamine system and subsequent terminal release27. 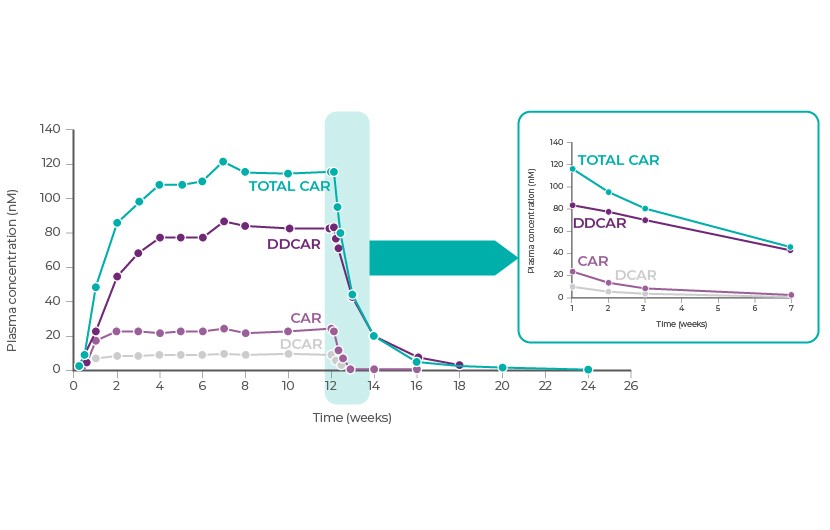 Mechanism of action of cariprazine. 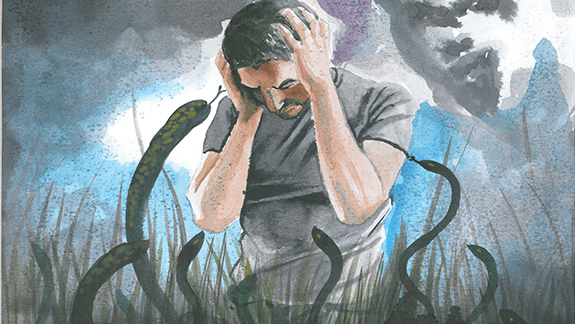 (COD: 300020/R07. Submitted to AIFA 16/04/2020) Once the diagnosis of schizophrenia is made, clinicians, patients, and families have important treatment 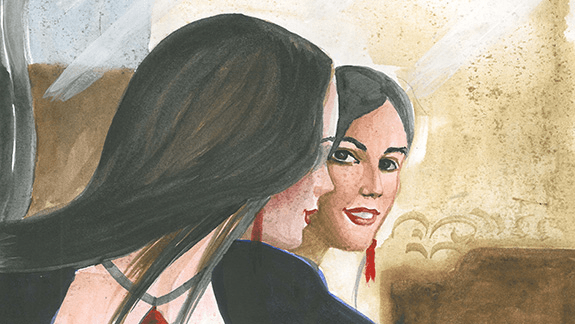 (COD: 300020/R10. Submitted to AIFA 16/04/2020) Negative symptom improvement must be accompanied by improved patient functioning in order for change to be