Antipsychotics are the cornerstone of treatment for schizophrenia. Since the 1950s, when chlorpromazine was serendipitously discovered, the design and development of these drugs have led to more than 30 different antipsychotics being approved. Although the receptor affinity profiles of these drugs differ considerably, all antipsychotics show considerable binding to dopamine D2 receptors at therapeutic doses—this binding mechanism is essential for therapeutic efficacy1.

The clinical efficacy profile of typical antipsychotic agents appears to depend on high affinity for and full antagonist activity at dopamine D2 receptors. Due to this receptor binding profile, typical antipsychotics are effective for the treatment of positive symptoms of schizophrenia, but they are unable to alleviate negative symptoms and cognitive impairments, which are also associated with schizophrenia. Therapeutic doses of these drugs also cause high rates of extrapyramidal symptoms (EPS), an adverse effect caused by antagonizing dopamine receptors in the nigrostriatal pathway2.

Like typical antipsychotics, atypical antipsychotics are antagonists at D2 receptors, though they are characterized by a lower liability for EPS and bind to a diverse range of neuroreceptor types2. For example, several of these drugs have high serotonin 5-HT2A receptor affinity relative to dopamine D2 and D3 receptor blockade1.

Typical and atypical antipsychotics both act as full antagonists at D2 receptors, although they have markedly different affinities. The wide range of symptoms associated with schizophrenia are thought to result from a combination of overactive and underactive dopaminergic pathways. Additionally, antagonist activity at dopaminergic pathways that are not as heavily involved in schizophrenia pathophysiology, such as the nigrostriatal or tuberoinfundibular pathways, can lead to severe adverse effects, such as EPS and hyperprolactinemia, and the worsening of negative and cognitive symptoms. Given these complications, a drug that can alter dopamine neurotransmission differently under various physiological conditions may offer therapeutic and safety advantages over currently available antipsychotics2. A partial agonist may capable of doing so—antipsychotics, such as aripiprazole, brexpiprazole, and cariprazine, that act via partial agonism at dopamine D2 and D3 receptors represent a third generation of antipsychotics1,14.

So, What’s a Partial Agonist? 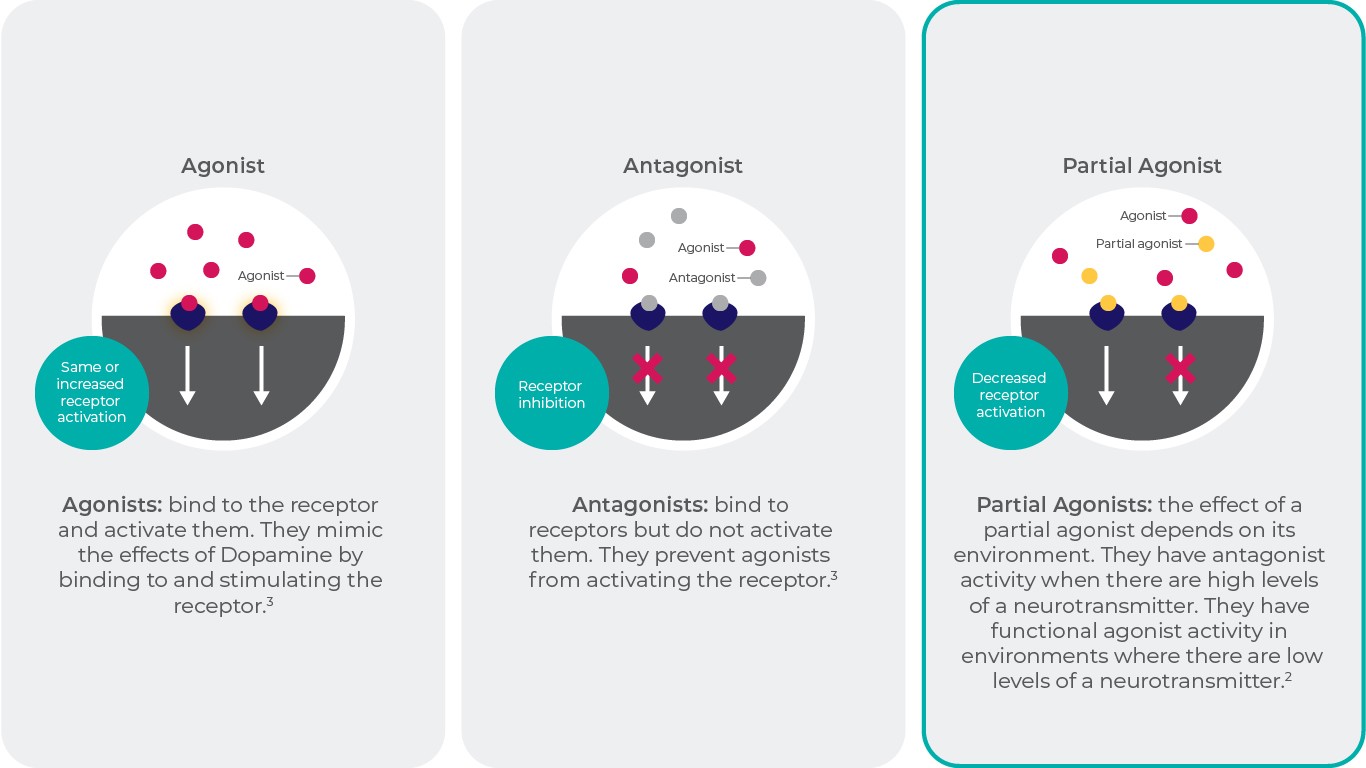 References: Adapted from Lieberman, J. A. Dopamine partial agonists: A new class of antipsychotic. CNS Drugs 18, 251–267 (2004)2; Lambert, D. G. Drugs and receptors. Contin. Educ. Anaesthesia, Crit. Care Pain 4, 181–184 (2004)3.
Thus, partial agonism at dopamine D2 receptors offers an appealing option for treating the symptoms of schizophrenia. A partial agonist should act as a functional antagonist in the mesolimbic pathway, where excessive dopamine activity is believed to cause positive symptoms, but a partial agonist should act as a functional agonist in the mesocortical pathway, where reduced dopamine activity may be associated with negative symptoms and cognitive impairment. In addition, partial agonism may also avoid complete blockade of the dopamine pathways associated with EPS and elevated prolactin levels2.

For a clinical response, a minimum of 50% occupancy of dopamine D2 receptors by antipsychotics is generally required, while occupancy above 85% results in an increased the risk of EPS and other undesirable side effects. This suggests that there is a therapeutic window between 60% and 80% for dopamine D2 receptor occupancy that balances a high likelihood of clinical response with low risk of EPS. Only clozapine and partial agonists at dopamine receptors have been shown to be exceptions to this generalization1.

Clozapine results in lower striatal dopamine D2 receptor occupancy (~40%) at clinical, which infers something about its mechanism of action and safety profile. In contrast, aripiprazole and cariprazine occupy a higher proportion (80% or more) of D2 receptors at therapeutic doses14. Consequently, antipsychotics that are partial agonists require higher dopamine D2 receptor occupancy levels to have a clinical effect than what is needed for dopamine antagonists. This may be due to these partial agonists having lower intrinsic activity compared with dopamine at D2 receptors, resulting in net functional antagonism, which ends up being similar to the behavior of antagonists at therapeutic doses1. 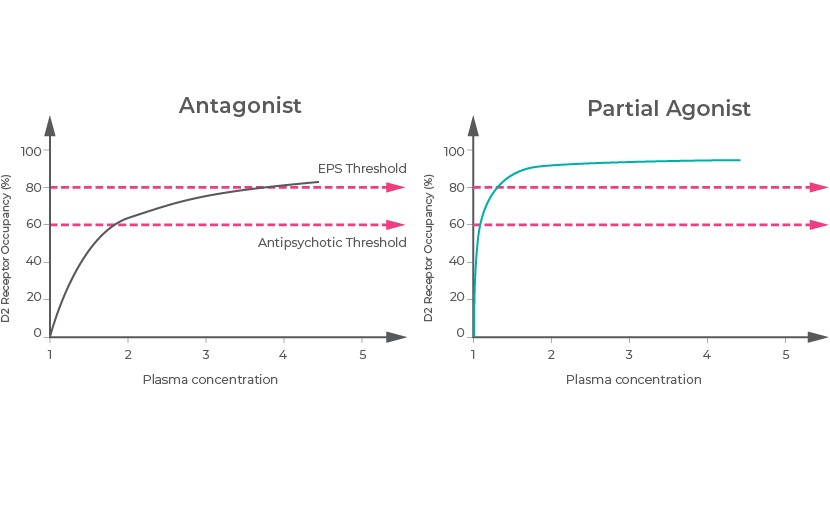 Reference: Adapted from Kaar, S. J., Natesan, S., McCutcheon, R. & Howes, O. D. Antipsychotics: Mechanisms underlying clinical response and side-effects and novel treatment approaches based on pathophysiology. Neuropharmacology (2019)1
However, it is difficult to describe intrinsic activity numerically since there is great variability between assay conditions. There is also the fact that in vitro measurements cannot capture in vivo conditions as these receptors are not isolated but instead interact with multiple other receptors and transduction proteins6.

Many antipsychotics have D3 receptor affinity that is about the same as or higher than affinity for the D2 receptor and generally lower than the D3 receptor affinity of dopamine itself. The latter point suggests that only minimal or no D3 receptor occupancy would be expected in dopamine-rich brain areas by drugs other than those with the most potent binding to D3. In other words, drugs need to have D3 receptor affinity that is even higher than that of dopamine itself to be clinically relevant. As such, the only agents that are likely to have clinically meaningful degrees of D3 receptor occupancy when dosed for psychosis are the D3-preferring agent cariprazine and perhaps blonanserin (a drug for psychosis marketed in Japan)12,14. Reduced limbic dopamine release has been hypothesized to be linked to anhedonia, depressive states, motivation, and pleasure. Results from animal models are consistent with this idea, showing that D3 antagonism improves cognition, mood, and motivation; clinical results also suggest enhanced efficacy in negative symptoms of schizophrenia for cariprazine12,14.

When Dopamine Concentrations in the PFC are Too High or Too Low, Cognitive Deficits May Arise13 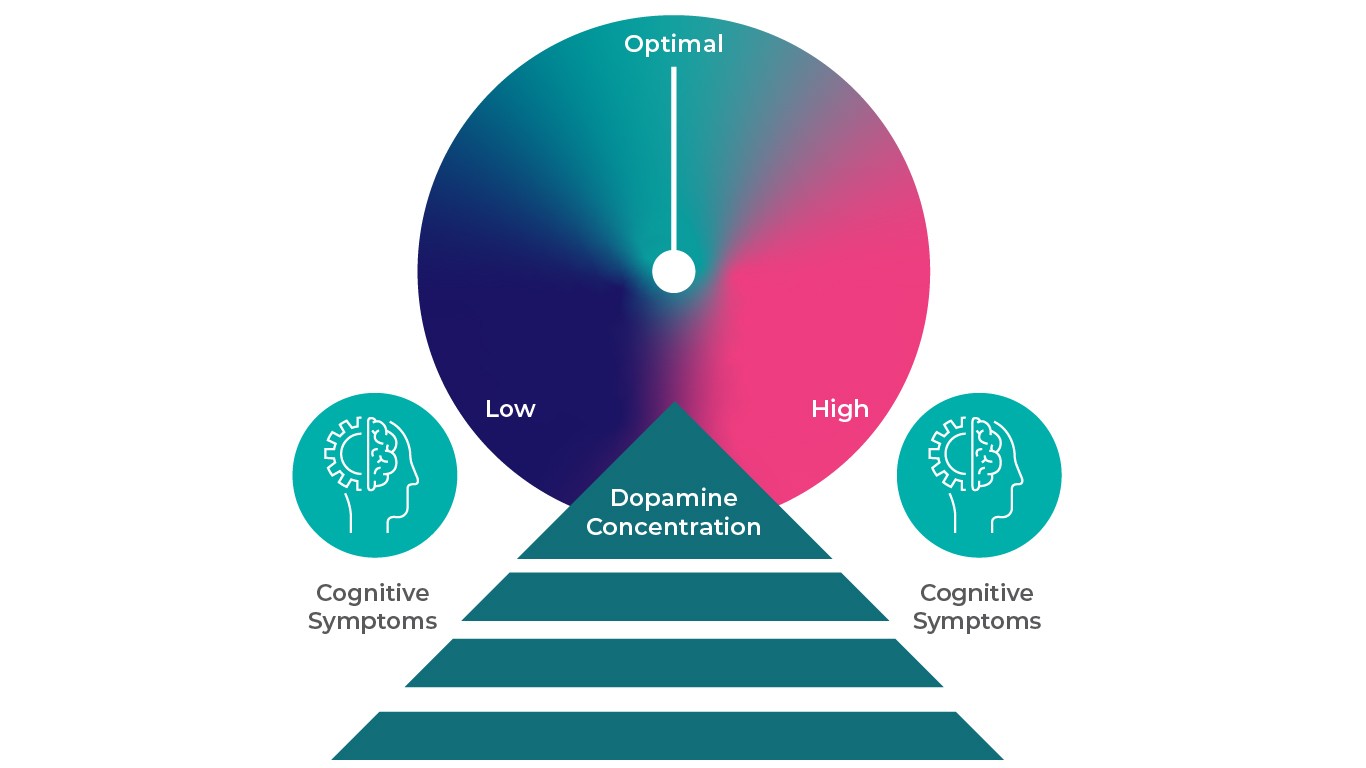 “Antipsychotics which act via partial agonism at the dopamine D2/3 receptors, such as aripiprazole, brexpiprazole and cariprazine, represent the third generation of antipsychotics.” 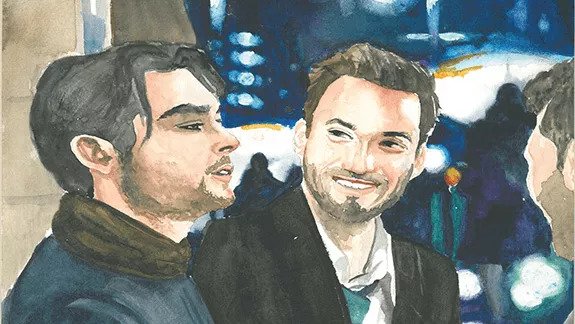 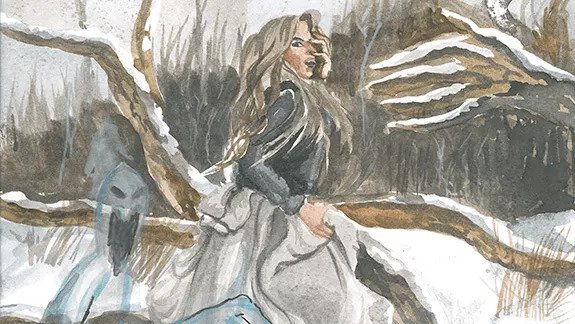